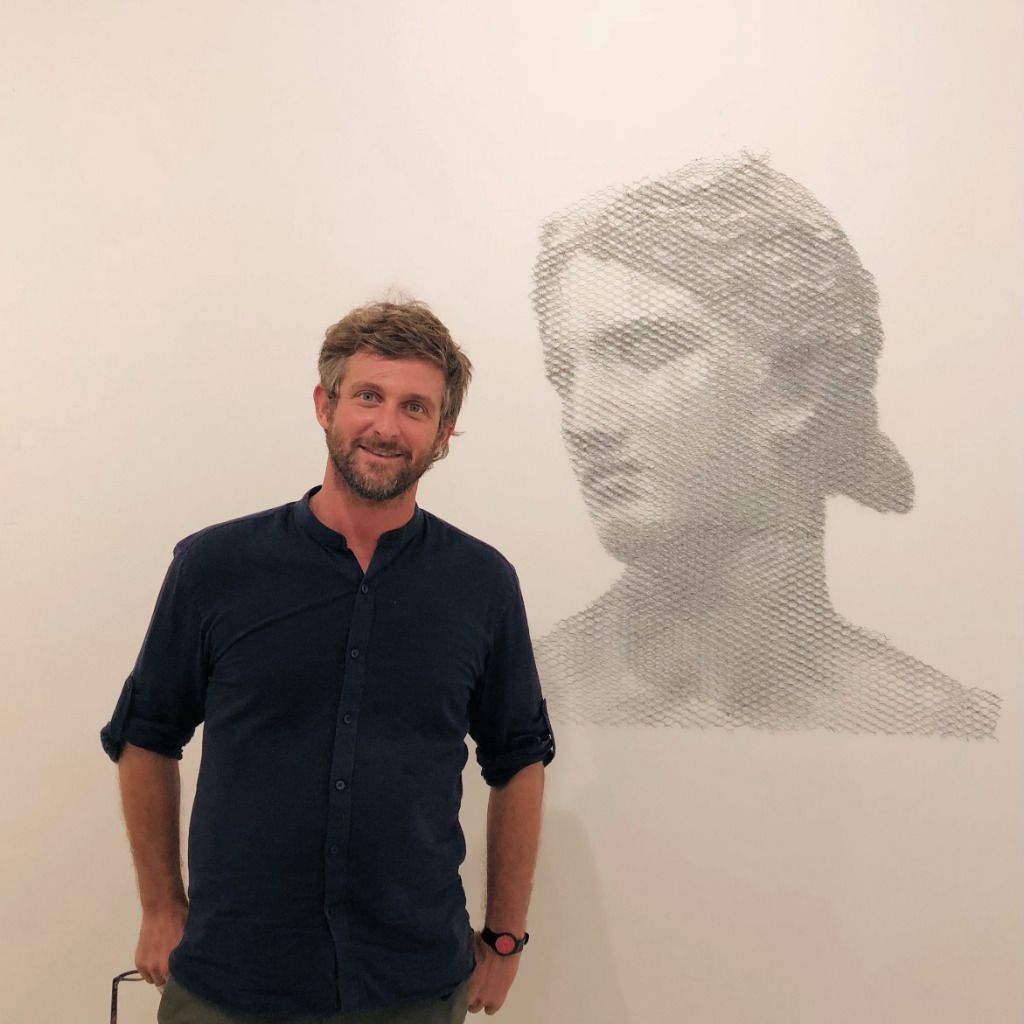 Without any drawing on the monochrome backdrop, from the studied superimposition of 10 layers of wire mesh, patiently cut by hand in studied locations, appear the chiaroscuro gradations that make up the images of young women’s faces, mannequins, details of classical statuary, or even interiors of buildings and urban views.
These works represent the symbolic sublimation of visions, which the artist captures from the contemporary iconographic panorama and from the passing of time, in order to make them resurface as a vague retinal impression that we find sedimented in a remote corner of memory.
The game of interweaving, displacement, overlapping and change of direction of the weave of hexagonal elements that makes up the mesh of the nets, allows you to grasp, at a certain distance and in contrast with the background, the figure in its ideal complexity of perception.
Light acts as a structuring element for the eye: it rationally recomposes the points of luminosity into which the intangible sensory sign is divided and to which the artist confers a material consistency.

Through the stratification of memories and experiences, the image resurfaces in this intangible substance, made possible only by losing oneself in a vision that does not follow the cognitive parameters of perception, raising doubts and questions about the true consistency of human being and the impossibility of fully grasping the essence of reality.

From his professional experiences as a graphic designer and photographer derives his analytical approach to the image that leads him to break it down into its constituent elements, stratifying it into planes of vision that are recomposed in the distinctive features of the figure.
In the early 2000s, his first experiments scanned the chiaroscuro levels of physiognomies, anatomies and natural elements in the superimposition of planes of various materials, such as sheets of plexiglass and acetate or wood, divided into strips, to arrive, in 2014-2015, to shape their chiaroscuro levels by cutting out and overlapping layers of tulle. By the will of the critic Paul Malone, these works were exhibited, between 2007 and 2009, in London, Amsterdam and Berlin, where he exhibits silhouettes of characters scanned in the depths of paper, as well as human bodies born from the interweaving of regular modules on a pvc net.
After the works Kairos/Kronos (2007), where the figure emerges from the stratification of carvings on layers of wire mesh, are selected for the Biennale d’Europa e del Mediterraneo in Bari in 2008, his work acquires an international visibility that leads him to exhibit in London in 2010. In 2012 he won the Rigamonti Prize, as part of the San Fedele Visual Arts Award in Milan, the Fist Prize of the Nocivelli Award. in 2014, he exhibits at the Palazzo Reale in Milan and at the MAR (Art museum of the City of Ravenna), which acquires one of his works, as, in 2016, the MuSa of Salò.
In 2016, Galleria San Fedele in Milan hosts his solo exhibition, as well as Paratissima Torino, as winner of the First Absolute Prize of the previous edition. The last aspect of his research, the works made on layers of wire mesh, earned him the Special Prize of the International Contest ArTeam Cup 2016, promoted by the magazine Espoarte, on the occasion of which he exhibited at the Palazzo del Monferrato in Alessandria. In 2017 he exhibits at MAR, next to masters such as Mirko Basaldella and Lucio Fontana. In 2018, as a finalist of the prestigious Cairo Prize, curated by Arte Mondadori, he exhibits at the Royal Palace in Milan: his portrait of the Pontiff is presented during an audience at the Vatican and participates in the inaugural exhibition of MAG (Mediolanum Art Gallery in Padua). In 2019 he exhibits in Paris, Mykonos, New Orleans and Luxembourg, at the National Etruscan Museum of Villa Giulia in Rome and at the Hub/Art space in Milan; moreover, the Diotti Museum of Casalmaggiore (Cr) hosts his personal exhibition and participates in the Biennale of Soncino. He is also present at major contemporary art exhibitions such as Arte Fiera Bologna, Art Verona, Art Athina, Art Vilnius, Art Bahrain, Art Dubai, Context | Art Miami.