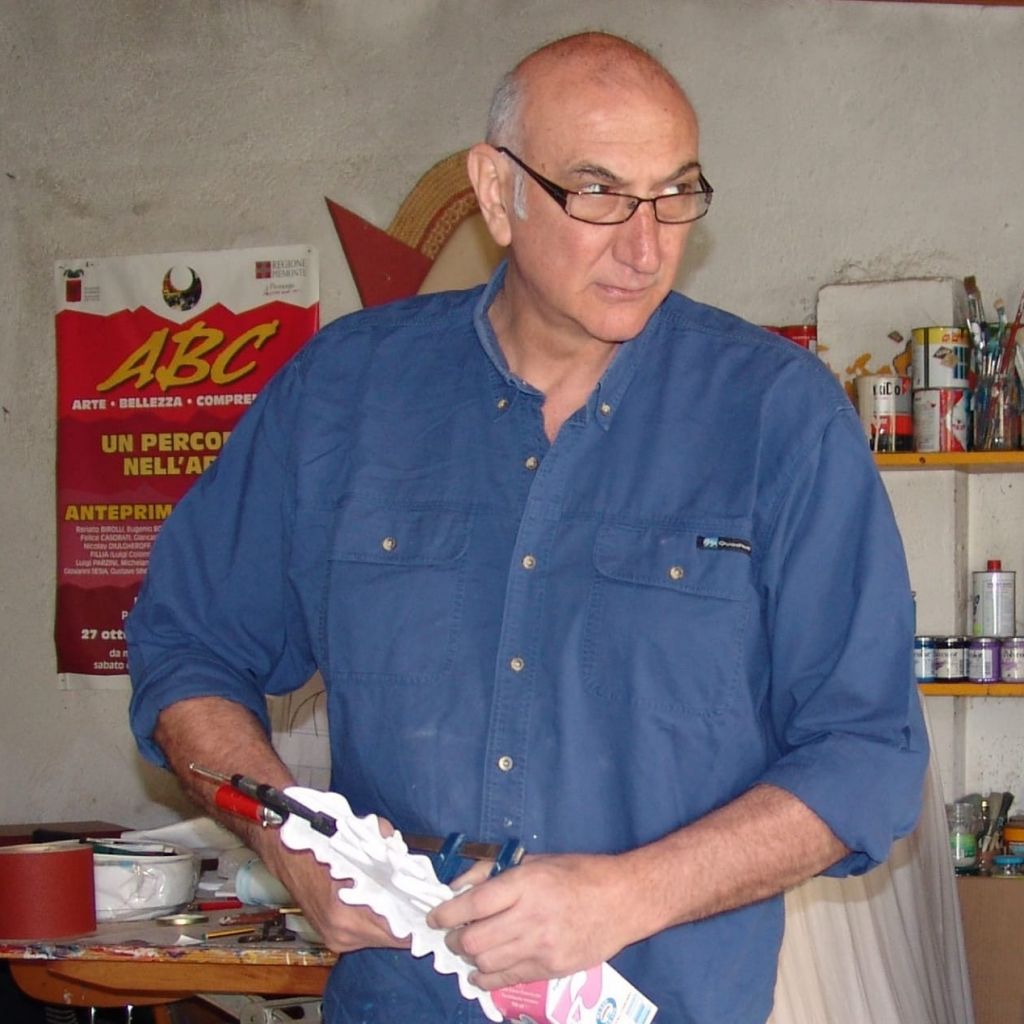 Limbiate (Mb), 1955
In the 80s, counted by the critic Renato Barilli in the “New Futurists” group, theorized by him, the artist inherits from the historical futurism of Balla and Depero, more playful and decorative than the austere and programmatic Boccioni and Severini, the vocation to a reconstruction of the universe that incorporates, in the work of art, suggestions taken from everyday life and contemporary issues through multiple artistic languages: from painting to sculpture, from figurative art to installation, from design to graphics. For this reason his works recover the objectuality of historical Pop, focusing on the material consistency of the work (in contrast with the tendency of conceptual and poor art to thin it), but subtracting the harsh polemical connotation against the consumer society to give it a soft and attractive, colorful and persuasive, in Neo-Pop style.
Brevi gives new dignity to painting, but in a new dimension, where it is applied to the three-dimensionality of the fluid, soft and dense contours of his works. His “pictosculptures” are affected by the vocation of environmental expansion of Arte Povera (also derived from his degree in Architecture) and its dialectical game between industrial material and organic origin; his themes evoke the nomadic citations of the Transavanguardia and refer to the myths of the collective imagination, progress, speed as a result of technological innovations: the machine, the motorcycle (Moto mito, 2007), so dear to the historical futurism.

Read More
Like his forerunners Balla and Depero, Brevi loves to reshape forms with a playful and decorative spirit, playing on the duplicity between artificial and natural, mechanical and living, iconic and aniconic, with the rhythmic dualism of empty and full spaces, giving life to new ways of perceiving the image. The artist’s work are narrative constructions that unravel on the wall through the studied juxtaposition of chromatic clusters, with “soft” profiles, curvilinear, carved and modeled within his material of choice, the MDF (Medium Density Fibreboard), a chipboard wood full-bodied and dense, widely used in the manufacture of furniture and, later, painted with bright paints and acrylic enamels to create a translucent patina that makes you forget the original hardness of the material.
In his works, fluid iconographies with plasticized shapes are configured through the subdivision into masses each defined by acid and cold colors that bring us back to the artificiality of the material; even if masked as they are by organic conformations inspired by nature, their subjects bring us back to the imaginary of consumerism and it plasticized icons (portraits of Marilyn, Audrey Hepburn, James Dean), that of the 80s Milan, glamorous and fashionable in which the artist grew up. His clear laters of color in two-dimensional planes covered with a sparkling patina explode on the wall like an outpouring of vapors, they disperse in space taking the form of a swarm of butterflies, riverbeds, defining curvilinear silhouettes of hills, forests and mountains, or human figures and animals, motorcyclists, climbers, divers and Vespas; their thickening follows the same figurative modalities of the advertising language of mass-media, where images are amalgamated in a continuous flow of sensory stimuli.
Working the material like a conjurer, the artist removes us from this visual addiction, arranging the configuration of the carvings within his vast rounded planes that sometimes turn into profiles of figures, to be identified within the chromatic texture of magmatic elements of color with a wavy course; at other times, they themselves act as constituent features of the image, in a sort of plastic phantasmagoria. It is up to us to choose whether to identify the subject or to lose ourselves in this spatial construction constantly poised between painting and sculpture, artifice and nature. And subjects such as butterflies and trees, as well as the themes dealt with, bring us back to the natural world: the loss of biodiversity, the complex balance of the earth’s ecosystem, the relationship between man and nature, Jewish culture - see the exhibitions Chanukkahal Joods Historisch Museum in Amsterdam and Channukkà, at the Musei dei Lumi in Cesale Monferrato (Al) - the brutality of war; contemporary and topical themes to which the witticisms of the linguistic games of the titles confer an epic breath (see the exhibitions Jean Cocteau et le mots at the Maison du Livre and du Tourisme in Becherel, France and Jean Cocteau - Poésie de Théatre at Teatro Due in Parma).
Here, the use of the words is perfectly integrated with the subject of the work which, as an essential expressive from, becomes a frame that blocks a moment in the unfolding of the imaginary story narrates (Tra le righe delle foglie son scritte le storie – cap…..), in a perfect linguistic synthesis that dialogues with the oneiric reality created by Brevi, sometimes citing the universe of fairy tales to suggest a timeless moral with playful irony. The kaleidoscopic dimension of colors generated by the artist is perfectly in line with the “liquid society” of post-modernism cited by Bauman, but without forgetting the legacy of artists currents that preceded him.