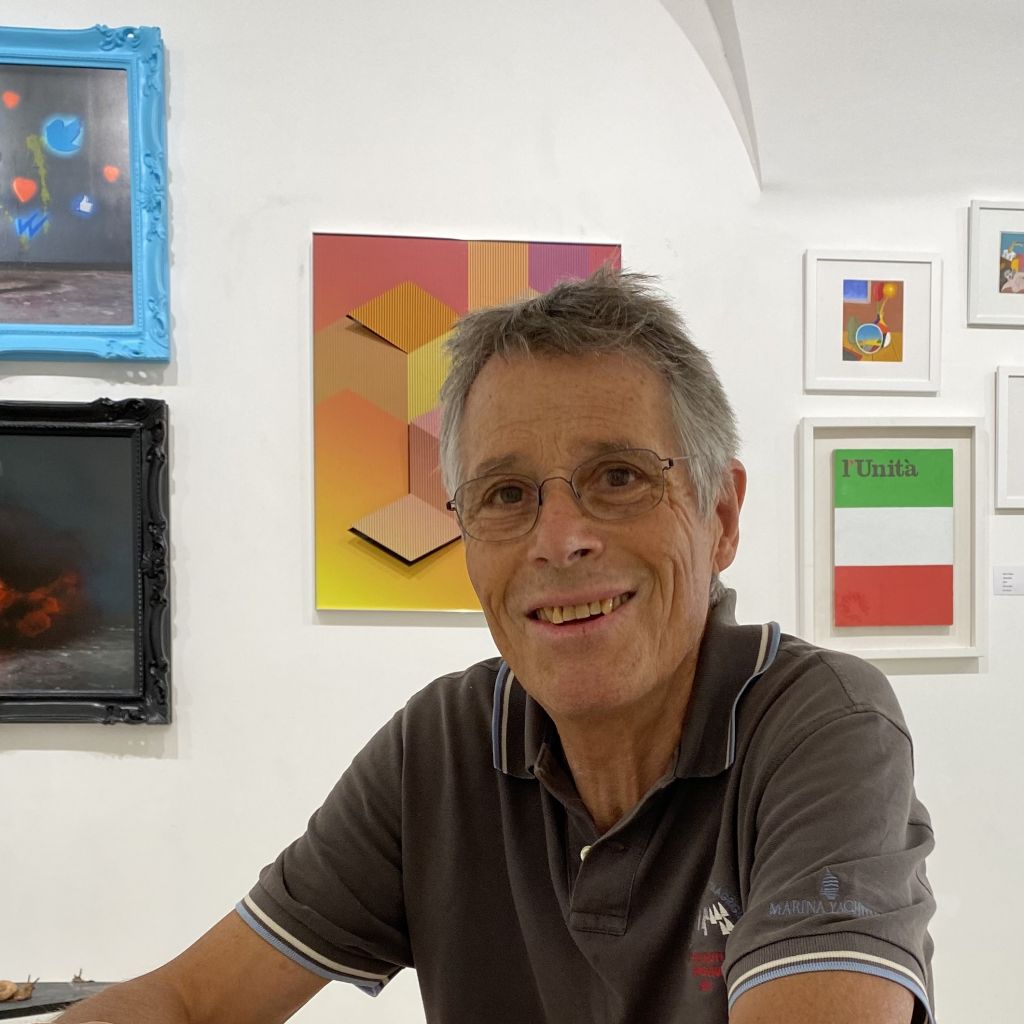 (Trieste, 1949)
To harness the artistic research of Sandi Renko within the definition of “kinetic and programmed art” is too simplistic: even if, by skillfully scanning, as in a dance, the acrylic color with vertical lines within the three-dimensional facts from the concave and convex trend of the canneté, manages to create a perceptual instability, given by the structural and compositional changes that vary incessantly depending on the point of view, not everything is resolved in this dynamism; in fact, the volumetric spatial constructions that cross the entire surface of the work like waves, always assuming new geometric configurations, are modulated and delimited in space, by a multiplicity of luministic variables, which are entrusted with their sudden appearance within a space marked by the incessant evolution of the overturning in depth of the primary from Necker’s cube, the transparent rhomboid, so dear to Gestalt, as well as “obsession” and “mania” of the artist. The cube has been his constructive module ever since the first three-dimensional set designed in 1967 (Scena), characterized by a thickening of cubes that break through space, a structure that we will also find in the wavy sheets of transparent polycarbonate where light disperses, extending itself in indefinite reflexes.
Even the space of representation, in his works, is marked by the infinite possibilities of expansion of this solid and emergence within it, as flashes of light, of two-dimensional linear architecture is made possible by a studied vertical scanning of color in counterpoints of lines between the micro reliefs of canneté, a color spread in a conscious way, following motivations always related “to the vibrations and feelings that he wants to express”, aware of the effects of perceptual changeability that will follow the movements of the observer. Sandi Renko, like his friends of Verifica 8+1 (1978-2008), with whom he exhibited at the 57th Biennale at the Fondazione Bevilacqua La Masa of Venezia, follows an analytical line of structural research in art-neo-constructivist, which reduces the color and shapes to essential elements of the visual lexicon, structured within a support tear stabilizes a portion of his visual exploration of space through the evolution of elementary geometric shapes, the facts of the canneté painted vertically; but not only, strong in him is the influence of kinetic and programmed art in the careful study of the psychology of form (Gestalt) and visual perception. It is no coincidence that when he was a student at the Nordio Art Institute in Trieste, in the decade between the 60s and the 70s, he was a member of the avant-garde groups that looked to the new aesthetic trends, such as Programmed Art, following the courses of Enzo Cogno and Miela Reina, members of the Raccordosei group which operated in the Arte Viva center, at the Feltrinelli bookstore in Trieste, frequented by designers and kinetic artists such as Alviani, Mari and Munari and the true center of protest.

Read More
Sandri Renko, therefore, approaches optical dynamism, thanks also to the acquaintance in the ‘70s, when Gruppo N had disbanded, of the man who was its proponent, Alberto Biasi, more than as a goal to be reached, as an instrument of existential investigation, becomes the mean to probe the reality of the things through a rigorous structural formulation of the space that comes from his propensity to the planning, derived from his experience as a designer in the ’70s, and then transferred in the artistic field, where this phase coincides with the final concretization of the work, in a fusion between at and life, functionality and aesthetics, according to dictates that were already of the Bauhaus.
This is how the solid structural setting of the modular geometric grids is born, its webs of ribbons that unfold in space the faces of the cube as structures with a linear trend, defined by the rhythms of overturning, sinking of the lines that constitute the faces of the cube, the primary structural module of elaboration and construction of forms, in an infinite evolution that reflects that of natural structures. Geometry is transformed into a precious expansive element for the exploration of nature, offering man the possibility of studying its forms in order to reconstruct their internal structure, as Renko did when, as a boy, he studied the structure of objects with a camera obscure, when designing had become a method for investigating reality. This three-dimensional semblance of his works then dissolves into trails of elaborate two-dimensional architectures delineated by the lines that delimit the cubes, which arise from the luministic modulation of color, scanned in vertical lines in the folds of the canneté. The origin of this dynamic can be found in the work Intreccio (1968), where the tension that assembles the solid composed of a plurality of white cardboard cubes, linked by the strips of which they are made (Scena, 1968), makes it explode, causing the strips of which it is composed to spill out.
The design of the geometric grids that expand in space stems from this from in perennial diffusion where the unlimited expansion of geometric solids such as the cube, a factor in continuous variation and development, becomes not only a gnoseological instrument, but also an inventive one, opening up to the artistic dimension: the artist reinvents the rules of composition, focusing on a form extrapolated from the unfolding of the grid through the superimposition of a mask and corresponding to the surface of the work that is being created. Sometimes the cube is rounded, creating rounded forms in free evolution in space (Ritondi), always deriving from the matrix of the cube. In the works of the Sider series, it goes beyond the element of squaring the cube, which is deconstructed and shaped by moving the mask to create polygons that open outwards, breaking the equilibrium and exact proportions of the primary geometric forms of the triangle, circle and square, the foundation of the artist’s research. Renko started, in fact, by studying their inscription in a form in which they interpenetrate in an exact way, as in the work Certriqua (2006),  when the dance of chromatic nuances still focused on the contrast between black and white. A construction that recalls that of Leonardo’s famous drawing of Vitruvian Man, where the ideal proportions of the human body are harmoniously inscribed in the perfect forms of the circle, a metaphor for the sky as divine perfection, and the square, the symbol of the Earth. It is no coincidence that the research of Sandi Renko started from these assumptions: Leonardo thought of the mathematical-scientific exactitude of painting as an instrument of knowledge of phenomenal reality, just as the artist looks at the geometric structuring of his cubes, at his grids that break through the surfaces, fraying into linear elements defined by the luministic variables of color, faceted in the volumes the canneté and on the bilaterally of the cubes, as on the ridges of the mountains that Renko loves to observe and explore, being from Trieste, or like the waves of the sea; it is no coincidence that he crossed the Atlantic Ocean in 1999 aboard the sailing boat Mica I°.
Sandi Renko has participated in numerous national and international exhibitions since the ‘60s: he has exhibited in Germany, at the Verifica 8+1 Center of Venezia, at the National Museum of Villa Pisani in Stra (Ve), at the Gardens of the Castle of Este (Ve), in Slovenia, in Austria, in New York and he’s present at major exhibitions of modern and contemporary art as Artefiera Bologna and Art Verona.