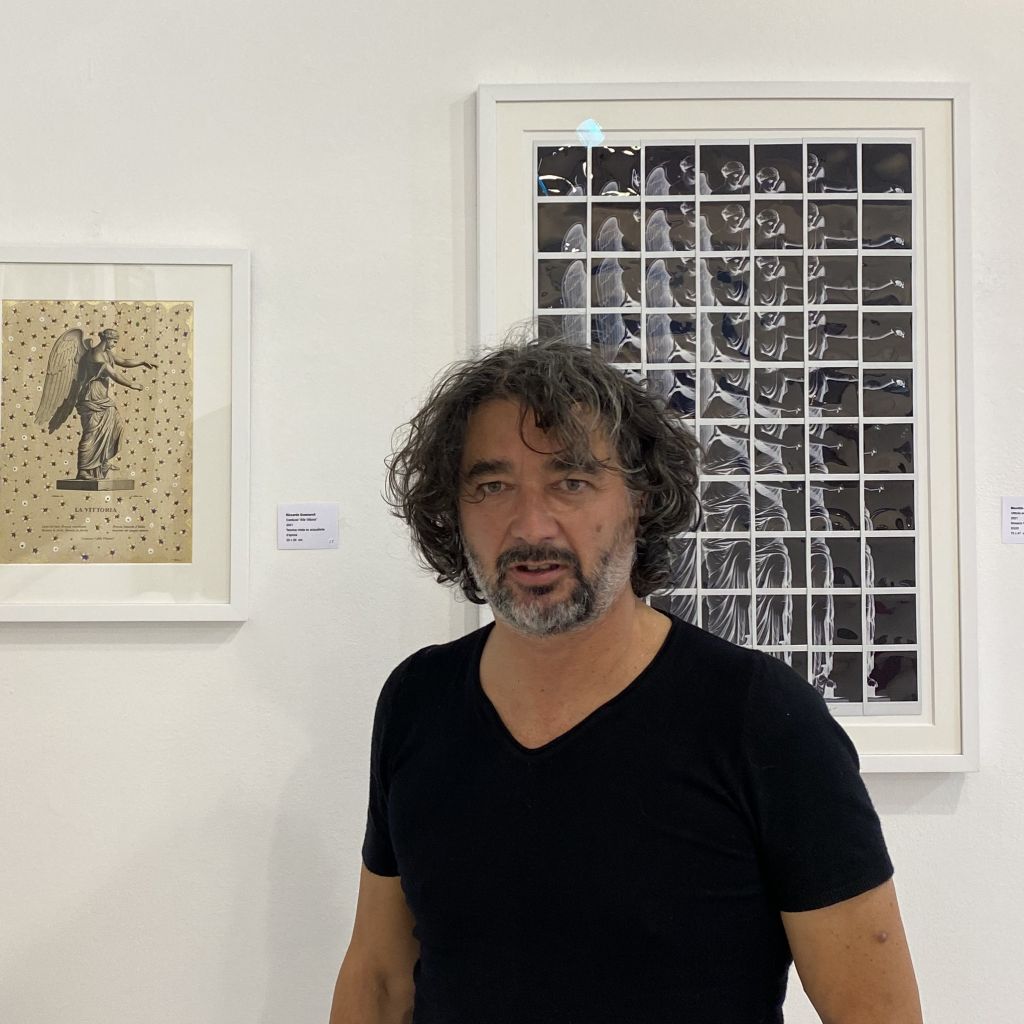 (Verona, 1963)
Gusmaroli’s conceptual research is focused on the impulse that man has towards the exploration of new territories, ideally represented as an elliptical and spiral wandering in the meanders of imagination and psyche, through the paper boats that, in addition to being the constituent elements, become the metaphors, multiplied to infinity, the yearning to go beyond the two-dimensionality of the canvas, in a new energetic, vibrant, plastic and multifaceted dimension.
In the early ‘90s he exhibited at the Castello di Volpaia, in Raddam Chianti (1991), at the New York gallery of Sperone (1993) and at Studio Raffaelli in Trento (1994), as well as later, at the Civic Museum of Lodi, at the Castle of Corneliano Bertario (Mi) and at the Viafarini Gallery in Milan, next to Carla Accardi and De Maria, in 1996, and, in 1999, in Brussels and Barcelona. His artistic path is influenced by the experience as still-life photographer at Studio Azzurro, which leads him to found Studio Acqua in 1984.

Read More
This initial training is evident in the vocation to build compositions of everyday objects such as stamps, sheet music and dice, and in the lively inventiveness with which the photographic image is covered by calligraphic colored signs that, later, will be transformed into paths on maps, will lie on flowers, or will cover the entire surface of the canvas. Between the ‘90s and the 2000s, his artistic language will also consolidate: here then appear the red, white and black monochromes, with the dance of the little boats on imaginary routes, spirals of tablets that draw persuasive arabesques, the selections of stamps covered by his amanuensis stroke, the little airplanes, the naval battles, the castles built with playing cars, the canvases with everted holes, similar to volcanic morphologies, the eggs miniaturistically perforated with lace and the nautical charts rippled by tiny chessboards with star-shaped origami conformations. The 2000s mark the beginning of a fertile season, in art galleries in Turin, Milan, Rome, Bologna, Lugano, Paris, Monte Carlo, Hamburg, Tel Aviv, and Providence, as well as in public spaces such as Villa Sartirana in Giussago (Mb), the Museum of Trevi Flash Art in Arezzo, the Foro Italico and the Museo del Vittoriano in Rome, the GAM in Turin and the Museo Civico d’arte Moderna e Contemporanea in Arezzo. In 2007 he exhibited at the National Museum Liu Hai Su Art  Centre in Shangai, in the occasion of the exhibition Masters of Brera.
In 2009 he held the collective exhibition Mappe at the Galerie di Méo in Paris, where he exhibited alongside Boetti, Fabro, Pizzi Cannella and Salvo. In 2010 the Colossi Arte Contemporanea gallery dedicated to him the solo exhibition 3 oceani, 7 mari, 149mila km² di terra. His work is a visual poetry that consists of delicate oriental origami, arranged in swirls, as an allegory of ocean currents, around the indefinite outlines of geographical boundaries in gold leaf, a material which has been historically used in art to define the cancellation of the space-time dimension, generating in the viewer a sort of détournement, visual estrangement; an aspect that led him to work with the group of Portofranco, founded by Franco Toselli, along with Paola Pezzi, Iacopino and Kazumasa. The artist’s desire to overturn the objective parameters of measurement of space, to immerse the viewer in a perceptive dimension free from cultural conditioning has allowed him to reactivate the space of representation from an aesthetic point of view, thanks to the repetition of formal modules generated by a simple gesture such as folding, but able to create visual situations of extreme formal delicacy reminiscent of oriental arabesques. In 2016 he exhibited at the UNX Gallery and at the Italian Cultural Institute in New York, alongside Bonalumi, Simeti, Dadamiano and Pinelli.